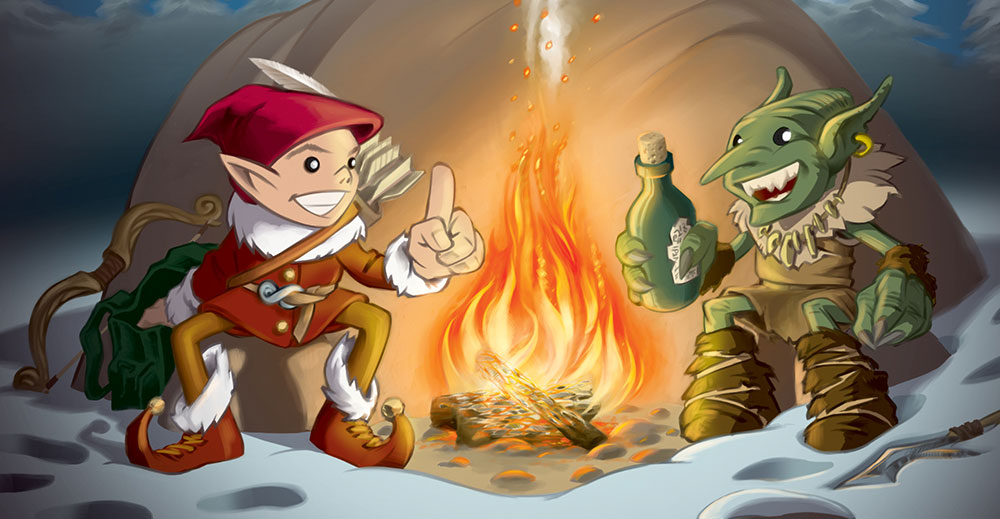 Every Christmas Eve in Reindeer Grove, the elves prepared for the goblin attack.

At midnight, the goblins would charge up Glimmer Hill with their shrieking voices and mysteriously carved spears. The elves would defend the hill, firing golden arrows from their silver bows, and a battle would begin that neither side would win.

But the elves had their orders from the High King. Defend the elven way of life!

Each year the Elven King ran a karaoke lottery to choose the elven defenders. The King thought himself a wonderful song writer. Much to the despair of the elves, he was an awful song writer. He would post one of his terrible songs in the town square, approach an elf and demand the song be sung. If the elf didn’t know it, his name was put into the lottery.

That’s how Zingle was chosen.

He didn’t know the King’s latest song “The Birds Don’t Land on Me Anymore Since I Burped on that One Day.”

It was supposed to be a great honor, but Zingle didn’t see it that way. He wanted to spend Christmas Eve with his two young girls, Ara and Sandy, who were finally old enough to help bake cookies for Santa. His wife Annabelle was really looking forward to having their traditional Christmas Eve dinner by the fire. Instead, he was out in the cold, stamping his small feet trying to stay warm. The bells on his elf boots cascaded sad little notes into the frigid air.

He looked at the rest of the elven defenders as the elf sergeant led them up Glimmer Hill. Zingle was by far the smallest. What good would he be against a goblin attack?

Since the elves hated to fight, the King provided a great feast to keep up morale.

As the elves reached the top of the hill in the soft blue and pink glow of dusk, they were presented with a large table lavishly set. Sweet and savory offerings were scattered among silver plates and crystal goblets. A large roasted goose with all the trimmings sat upon a golden platter.

A huge evergreen tree topped with a silver star glittered with lights and tinsel, overlooking all.

The small elf sighed, wondering if there was some way to sneak away when the sergeant’s voice sounded out.

“Listen up, elves!” he said. “Time to choose your bow and quiver and enjoy the King’s feast!”

There was a halfhearted cheer. Nobody wanted to be away from their families fighting goblins, no matter how grand the feast. But the sergeant urged them into action. Jutting from the snow were twenty silver bows, each with a quiver of golden arrows. The elves lined up to grab their weapons.

Zingle kept getting pushed out of the way. As he clumsily took his bow, he looked off into the darkness toward Mount Cloven, home of the goblins. The clouds created fearful shapes in the sky. Were the goblins there, just out of sight?

He looked back at the lights of Glimmer Hill, but they contained none of the usual Christmas joy.

Obedient to the Goblin King, twenty goblins were chosen by sneeze lottery to launch the Christmas Eve attack. To be sneezed upon by the king (a great honor) meant your name went into the lottery skull. Since the King had a terrible allergy to cave mushrooms (which was quite unfortunate, because he ate loads of them) he sneezed a lot.

And he never covered his mouth.

Wunk had been sneezed on, so here he was, away from his family and out in the cold. He was shivering and completely miserable. In fact, all the goblins were gloomy. Goblins hate the cold and rarely leave their warm caves, except to hunt.

“Let’s go, you dogs!” said the goblin sergeant. “We need to cross the gully by dusk. If you want to be back by dawn to see your families this Christmas morning, you’ll make it double time!”

Contrary to popular belief, goblins love Christmas. Every year, Santa visited those on the nice list and brought them presents. (The Goblin King rarely made the nice list.) So the goblins felt as bad about being out on Christmas Eve as the elves.

“What’s the point?” muttered one goblin who had a limp and wore six earrings in his left ear. He pulled his bear skins tight. “It’ll just be another failed attack. The elves know we’re coming. We’ll just chuck spears and arrows at each other and freeze to death.”

“Yeah,” said a goblin with a duck bone stuck through his nose and a big purple wart on his right eye. “Plus the polar bears are about, and those reindeer can be pretty mean.”

A chorus of “yeah’s” and “no kiddings” sounded from the group. One said under his breath “Donner bit my wife!”

The sergeant’s eyes bulged in anger.

“You fools!” Spittle flew from his nearly toothless mouth. “The elves mock us with their colorful clothing, flaunt their toy riches in our faces and hoard Santa’s sweets! Aren’t you tired of being put down by the elves?!”

Various responses leaked out of the goblins in the form of “Not really,” and “Who cares what they wear?” and “What is he even talking about?”

“The King has declared these truths!” said the sergeant.

“Like he knows what’s going on,” said a goblin with a necklace made out of tiny bird skulls. “He’s too busy sneezing on everyone.”

The goblins muttered and trudged ahead in the deep snow.

As the weakest goblin, Wunk struggled, trying to walk within the snow path created by the stronger goblins. He missed his wife and two young boys, Wog and Cog. This year they were old enough to stay up and trim the Christmas totem on Christmas Eve. He was sure his wife Korline was preparing the family dinner over the hot coals, and he was going to miss it.

All for a great honor bestowed by a sneeze.

Buy your copy on Amazon today!